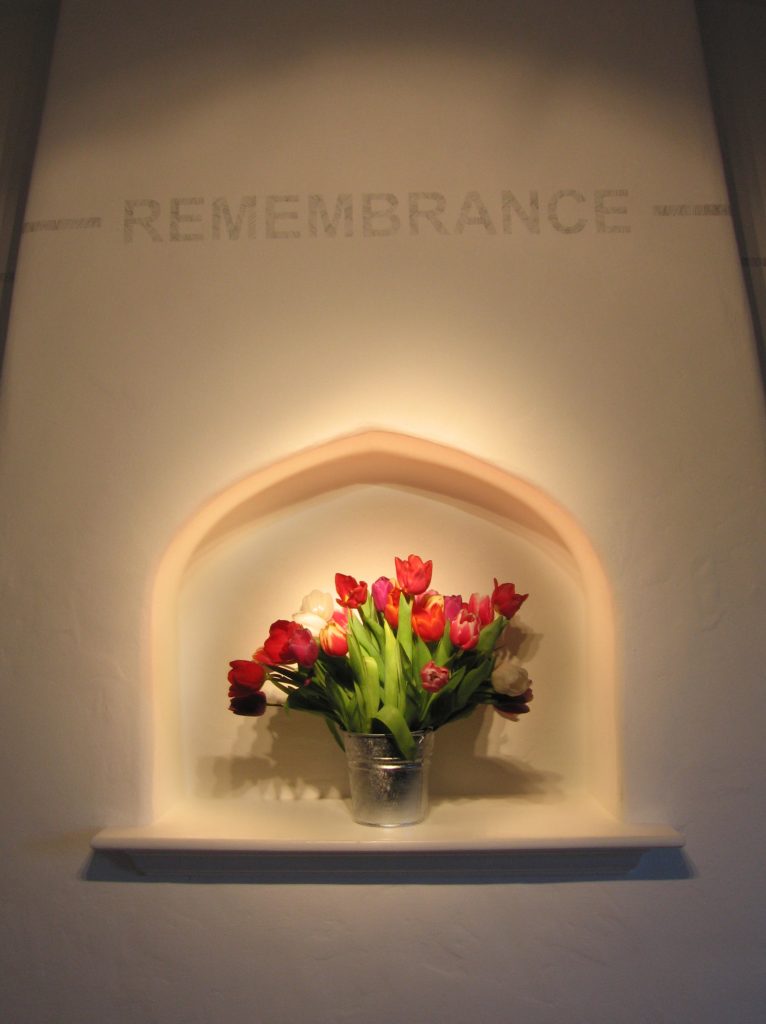 In early 2005 Always was presented as part of a site specific installation at HAUS Gallery in Pasadena CA. The gallery spaces at HAUS were once the rooms of a typical suburban house. The first gallery, originally the living room, was empty except for a linear freeze drawn with pencil on the walls just below the ceiling, and a display of fresh flowers in an alcove above the fire-place. The frieze consisted of a series of text fragments taken from names of the different burial areas found in a number of southern Californian cemeteries, names like “Abiding Love”, “Evergreen” and “Summerland”. A gauzy white curtain separated this space from the second gallery, which had once been the dining room. A looped version of the Always animated video was projected on the rear wall of this space in which a cloud dances in time to music in front of a snowy landscape. The cloud and the landscape were all computer generated. The soundtrack was the melody of the love song “You Were Always on My Mind” played on a vibraphone in a church. The third and final space in the gallery was a long dark corridor with a number of locked doors, just below the ceiling a verse of the song has been picked out in glow-paint, with the chorus apparently floating at the end of the corridor:

“You Were Always on My Mind”

Empire Described will take the form of a series of large format stereoscopic images of Bonsai trees integrated into 3D virtual landscapes. Each image pair will be viewed as a single 3D image using a custom designed viewer which will present the images as back-lit transparencies. This project was made possible by a fellowship from the Huntington Library in San Marino CA which allowed me to spend a month as a resident artist. After surveying 500 Bonsai trees in the Huntington’s collection I made stereoscopic photographs of 15 of them using a large format film camera. I am currently using 3D animation software to create a virtual landscape for each tree. I will integrate the 3D images of the “real” (but in their own way synthetic) trees into the virtual landscapes.

My interest in Bonsai stems from the fact that they are living plants that have been manipulated to simulate an idealized version of reality. The forms of the trees are closely controlled according to highly codified compositional systems, thus the living organism comes to personify an ideal, it becomes virtual in a sense. Empire Described will make each Bonsai part of a digitally generated landscape that will reference the oldest form of virtual landscape – the Chinese shan shui landscape painting tradition which emphasized the creation of fictional landscapes. Both parts of the landscapes presented in Empire Described will constitute attempts to realize an ideal, one part in the form of a living organism, the other by algorithmic generation in virtual space. Both will fail to some degree, both in terms of ideal form and the presentation of a seamless illusion. The final 3D images will provide various subtle clues as to their synthetic nature, both in the digital environments and due to the inherent limitations of Bonsai techniques. This marginal failure to achieve an ideal of some kind is a common thread in my work and speaks to a recurring struggle we all share. The hints that these images provide as to their synthetic nature speak to the fact that all ideals are contingent and culturally mediated, at some point we have lost the solace of absolutes.